One of the first things that new visitors to Glassdrumman Cottage notice are the pictures and paintings. Every wall has a picture and some are almost like a gallery wall, with numerous pictures. One visitor was so intrigued that they went round all of the rooms and counted the total number of pictures on display. And there are over 70 pictures, paintings and prints!

Gables and the Lough by JP Rooney

Most of the pictures are traditional in context and many have an Irish connection, either artist or subject, and help to set the mood within the cottage. All of the artwork was purchased at local auctions, while the rennovation of the cottage was ongoing . Old fashioned or heavy gilded frames are a great way of creating a traditional feel, as are pictures of bygone activities, such as hunting, farming and such like. Pictures within the living area generally have an Irish theme, mainly landscapes and locations, and cover a wide range of styles and subjects, including the Titanic! Hopefully these pictures will help visitors get a sense of what Ireland is like and inspire them to maybe visit some of the locations and see the actual landscape for themselves.

In the Harbour by Sam McLarnon

There are several examples of traditional landscapes by well known Irish artists in the gallery area, such as McLarnon, McKelvey and McIlfatrick, and these are a complete contrast to the paintings in the sun room. Abstract but dramatic, bold and direct; the paintings of JP Rooney are striking but not universally appreciated, especially by traditionalists. These paintings depict scenes from a long gone Ireland where life was harsh and survival a daily struggle. And this very harshness is highlighted in the darkness of his work. But who is JP Rooney?

Well the actual artist is called Martin Hasson and was born in Northern Ireland in 1950. A graphic artist by profession, originally he painted landscapes, portraits and abstracts in various mediums in his spare time. It was not until the late 1990's, after recreating in oil some of his earlier landscapes and seascapes, that he attracted more widespread interest and attention from collectors and critics, and decided to use the pseudonym of JP Rooney.

So why not visit Glassdrumman Cottage and make up your mind about the relative merits of traditional versus contemporary Irish art.

We stayed at the beautiful Glassdrumman Cottage on our wedding night - we couldn't have chosen a better location.... 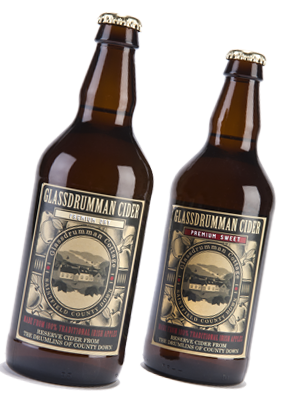